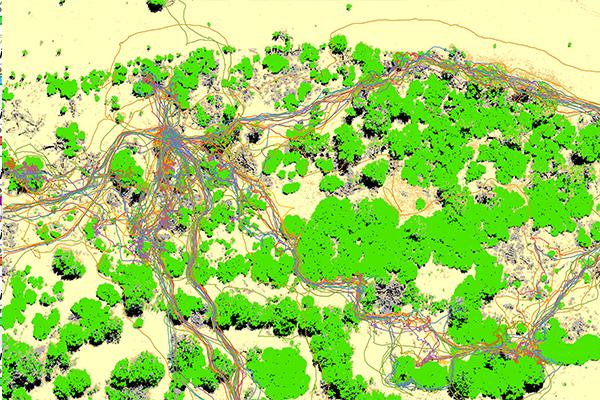 This CTW is a collaborative workshop for researchers and students with research interests in collective behavior and emergent phenomena in biology and its applications. The participants will be organized into interdisciplinary teams according to their interests and complementary skills. Each team will be tasked with exploring, analyzing and modeling original data sets provided by biologist attendees. The event will be similar in spirit to a hackathon in computer science, with the goal of finding new ways to understand the provided biological data. We emphasize that the workshop is meant to involve active participation with attendees working together across disciplines to solve problems in current research. In addition, regular debriefing sessions will be organized throughout the days of the workshop in order for each team to provide updates to and receive feedback from the rest of the participants on their progress.

This CTW is a collaborative workshop for researchers and students with research interests in collective behavior and emergent phenomena in biology and its applications. The participants will be organized into interdisciplinary teams according to their interests and complementary skills. Each team will be tasked with exploring, analyzing and modeling original data sets provided by biologist attendees. The event will be similar in spirit to a hackathon in computer science, with the goal of finding new ways to understand the provided biological data. We emphasize that the workshop is meant to involve active participation with attendees working together across disciplines to solve problems in current research. In addition, regular debriefing sessions will be organized throughout the days of the workshop in order for each team to provide updates to and receive feedback from the rest of the participants on their progress.

Leader: Helen McCreery
Co-leader: Justin Werfel
Title: Exploring group strategy and cohesion during obstacle navigation
Abstract: Animals moving through heterogeneous environments must navigate around obstacles, and new obstacles, such as fences, can appear blocking established paths. To navigate around such obstacles, animals must make a series of decisions that build on each other. When cohesive groups of animals face obstacles, they may make consensus decisions to remain cohesive. Previous work on obstacle navigation in ants during cooperative transport has demonstrated that some ants implement a flexible and robust group-level strategy for obstacle navigation, during which the group behavior changes to match the difficulty of the task. Using existing animal tracking data, we will explore group behavior around obstacles in vertebrates, focusing in part on conditions that lead to splitting or to cohesion. Perhaps groups remain cohesive if the obstacle is easy to navigate, but tend to split if a route is hard to find. If we find evidence for a group-level obstacle navigation strategy, we will also compare this strategy with the previously report ant strategy, to see whether there are common approaches across disparate animal taxa.

Leader: Ted Pavlic
Co-leader: Tomer Czaczkes
Title: Collectives and tradeoffs: Self-organized decision-making with multiple competing objectives
Abstract: Natural problems that most organisms have to solve are multi-faceted and may involve multiple competing objectives that must be traded off. An animal might have to put itself at risk in order to achieve some energetic targets from foraging. Responding to a protein deficiency might require accumulating a carbohydrate surplus. Responding to these tradeoffs as a distributed collective is especially challenging due to constraints on information flow. Moreover, in the case of large, distributed organisms and "superorganisms", different parts of the superorganism may simultaneously have different preferences and be at different stages in the local deliberation process. Furthermore, the highly stylized consensus decisions that are observed in the laboratory may actually result in resource allocation decisions that present methodological challenges for making inferences related to both mechanism and ultimate causation. In this project, we will investigate how mathematical modeling can provide new insights into how large distributed collectives (like slime molds and ant colonies) solve these problems, and how these problems can inspire new models from mathematics. We are particularly interested in understanding the "ecological rationality" of such distributed mechanisms, with an emphasis on the concomitant side effects of distributed solvers for multi-objective problems (e.g., increased deliberation time, sensitivity to irrelevant alternatives, etc.). Ultimately, we aim to better understand how to define a behavioral economics for non-human collectives.

Leader: Albert Kao
Co-leader: James Crall
Title: Choosing between rigid and flexible behavioral strategies: thermoregulation in the bumblebee Bombus impatiens as a case study
Abstract: Bumblebees can employ a variety of behavioral strategies in order to control the temperature of their nest, particularly the developing brood. These include the 'rigid' strategy of building wax canopies, which passively insulate the brood but cannot be easily dismantled should environmental conditions change, and the 'flexible' strategy of using worker bees to actively regulate temperature by thermogenic incubation (to heat) or fanning (to cool), which can adapt to current conditions but is energy intensive and diverts workers from other important colony tasks. Furthermore, there are strongly asymmetric costs as temperatures deviate in either direction from the optimal brood development temperature: colder temperatures only slow development while hotter temperatures kill the brood. In this project, we aim to develop a theoretical model to study trade-offs between these rigid and flexible strategies using new datasets on thermoregulation in wild bumblebee populations. The optimal strategy may involve a complex interplay between many variables, including both the mean and variance of the ambient temperature, the relative cost of diverting workers from other colony-critical tasks, and the asymmetric costs of suboptimal temperatures previously described. By comparing the behavior of different bumblebee species, and using historical weather data across the continental U.S. as inputs into the model, we can start to understand how evolution selects between rigid and flexible strategies, and how climate change may alter the fitness of bumblebees and potentially other important pollinators in the future.

Leader: James Curley
Co-leader: Lisa O’Bryan
Title: Modeling conflict strategies in social hierarchies
Abstract: Social hierarchies are theorized to emerge among groups of individuals as continuous fighting is costly for all individuals involved. Consequently, forming an organized social hierarchy where all relationships are resolved is believed to lead to reduced conflict throughout the group and be beneficial for all individuals. However, the variation in the dynamics of conflict between animals of different social statuses in hierarchies has not been well characterized and many questions remain to be considered. In this project, we will attempt to understand the optimal fighting strategies of dominant, sub-dominant and subordinate animals in social hierarchies. For instance, alpha individuals must maintain their position by fighting, but too much conflict would reduce body condition leading to possible loss of status. Similarly, beta individuals must be aggressive to lower ranked group members to maintain status but must also challenge more dominant members at sufficient rates to take advantage of any loss of condition of these individuals. In larger networks, individuals may not have sufficient opportunity to interact with all individuals leading to opportunities for others to splinter and form separate social hierarchies within the overall network. Subordinate individuals must also decide whether to restrain from fighting until they are sufficiently capable of maintaining dominant status or to consistently compete for every incremental rise up the social hierarchy. This project will use computational modelling of social conflict within networks to investigate how individuals of different statuses in groups of different sizes arrive at their fighting strategies. Our aim is to reveal insights into the general principles of social dynamics in social hierarchies across species, but also provide insights into conflict within any hierarchically organized social network.

Leader: Erol Akcay
Co-leader: Elizabeth Hobson
Title: Dynamic feedbacks between social structure and behaviors
Abstract: The evolution and consequences of social behaviors depend crucially on the social environment they are expressed in. In particular, the interaction network structure is known to profoundly affect how selection acts on behaviors. At the same time, the interaction network itself is dynamic and responds to social outcomes. In this project, we will use models of coevolving networks and social behaviors to understand the reciprocal feedbacks between social structure and behaviors. We will also attempt to use existing social network data to predict the trajectory of particular types of behaviors and how different behavioral states of the population might affect social structure going forward.

Leader: Simon Garnier
Co-leader: Jason M Graham
Title: Models of multi-constraint optimization in self-organized systems
Abstract: When foraging, ants take in a variety of input signals that play a role in determining both the individual and the collective motion of the foraging group. Among the most prominent signals are the local population density, chemotactic signals in the form of pheromone gradients, and the local topography of the terrain of the foraging environment. The interactions of the ants, based on the various input signals, tend to produce optimal or near-optimal foraging-trail patterns. Many other living systems exhibit similar self-organized optimization when facing multiple, sometimes contradictory stimuli. However most models of these systems consider one optimization dimension only. The goal of this project is to consider the construction and critical analysis of mathematical/computational models for living systems that tend toward multidimensional self-organized optimums. Furthermore, we seek to apply newly developed modeling frameworks to predict or explain how the most salient features of ant-foraging act together to produce the optimal emergent collective motion patterns observed in recent experiments. The results of this work will help to clarify some open questions in the mechanisms that underlie collective decision-making.