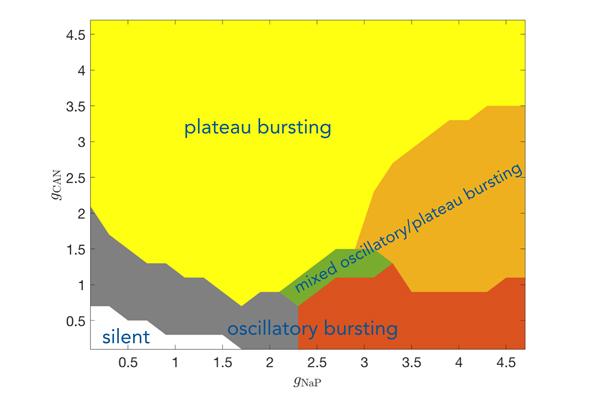 Breathing movements in mammals are driven by networks of neurons in the lower brainstem. Certain neurons in the Pre-Bötzinger complex (pre-BötC) of the mammalian brainstem exhibit bursting activity in the inspiratory phase of respiration. The pre-BötC has now been established to be the primary neuronal kernel for inspiratory rhythm respiration. While pacemaker neurons in the pre-BötC of the mammalian brainstem has been extensively studied both experimentally and computationally, little is known regarding pre-BötC pacemaker neurons at embryonic stages and how they develop prior to birth.  In the “Mathematical Modeling of Neuronal Networks” session at the SMB Annual Meeting held on July 22-26, 2019 in Montreal, MBI postdoc Yangyang Wang presented her recent collaborative work on understanding pre-BötC dynamics associated with progressive developmental changes. 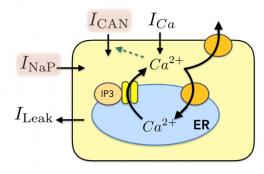 Recent data in mouse embryo brainstem slices revealed two distinct bursting mechanisms in the embryonic pre-BötC  depending on the persistent sodium current (INaP) or a nonspecific cation current (ICAN). In this work, Yangyang considered a model that exhibits both bursting mechanisms and has the ability to produce three different types of intrinsic bursting patterns observed experimentally. Methods of dynamical systems theory were used to uncover mechanisms underlying these bursting patterns, one of which closely resembles the bursting pattern expressed by mature pre-BötC neurons whereas the others look rather different. Moreover, the analysis elucidates how changes in the balance of the two burst-generating mechanisms within single neuron levels can lead to developmental changes of pre-BötC dynamics. This work discussed and analyzed full range of dynamics encoded within pre-BötC over development and provides important theoretical insights into biophysical characteristics of pacemaker neurons in mouse embryonic pre-BötC.

This fall, Yangyang begins a faculty position in the Department of Mathematics at the University of Iowa.